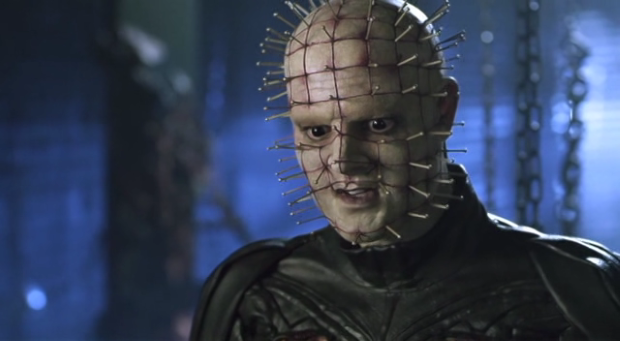 I’m gonna be honest right from the start and tell you all that I absolutely love Clive Barker. The man’s mind is limitless and he has a way of taking a common, standard setup and making something horrible out of it. I, like many other horror fans my age, was introduced to Barker back in the 1980s through his BOOKS OF BLOOD. These were a series of books (six volumes in total) that contained short stories on various topics. Not only were Barker’s stories bloody and gory, they were also scary, disturbing, and downright horrifying. “Pig Blood Blues,” “Jacqueline Ess: Her Will and Testament,” “The Skins of the Fathers,” and “The Inhuman Condition” are just a few of the stories that still send shivers down my spine. Add to these collections of short stories Barker’s sixteen novels, and you’ve got one helluva career!!

Barker’s latest novel THE SCARLET GOSPELS is special for a few reasons. Not only is this novel the final one for one of his most well-known characters, Pinhead, but this novel also stars the recurring character, Harry D’Amour, an occult detective and private investigator who specializes in cases involving the occult. Harry’s entire body is covered in tattoos that offer him protection against various forms of evil. Harry’s first appearance was in the short story, “The Last Illusion,” and briefly appeared in the novel, THE GREAT AND SECRET SHOW. Harry then pops up in another short story, “The Lost Souls,” and was a major character in the novel EVERVILLE. In THE SCARLET GOSPELS, Harry once again takes a central role as an occult investigator looking into some very bizarre occurrences that suck him down to the depths of Hell itself.

This novel is full of wonderfully bizarre and interesting characters that are all somehow connected to Harry D’Amour. There’s the blind psychic, Norma Paine who is perhaps Harry’s oldest and dearest friend; Carston Goode, a spirit who enlists Norma’s assistance in taking care of some of his business since he died; Caz, Harry’s friend who has a detailed knowledge of the occult and is the tattoo artist who put all the protection tats on Harry’s body; and Dale, a midget who saves Harry’s life in New Orleans but rejoins Harry and the others on their very important mission.

Barker always fills his novels and short stories with colorful, quirky characters, and THE SCARLET GOSPELS is no exception. There’s characters you love, ones you hate, and yes, ones you love to hate. The reader also gets more background details on Harry D’Amour. Harry is a complex and interesting character and Barker fleshes him out in this novel. I also enjoyed the time Barker took to get inside one of the horror genre’s greatest characters, Pinhead. We get some detailed background info on Pinhead as well, and learn more about what makes the Hell Priest tick. The characters alone is worth the price of the novel!!

dima
dima
What I thoroughly enjoyed, though, was Barker’s lengthy descriptions of Hell. The majority of the novel takes place in Satan’s domain and Barker gives us tons of details and describes it so well that I thought I visited that realm myself. Hell, though, isn’t the fire and brimstone of tradition. Barker’s Hell is a thriving civilization that resembles Ancient Rome more than the pictures of Bosch. Satan, in fact, disappeared from Hell shortly after he arrived. Pinhead kidnaps Norma and takes her to Hell, forcing Harry and the others to chase after them. Harry soon learns that Pinhead has been using His knowledge of human magic to eliminate the various ruling classes of Hell. Pinhead needed to eliminate these people so they wouldn’t stand in his way of completing his journey to the rumored Cathedral of Lucifer, where Pinhead hopes to meet the Devil Himself.

Along the way we meet the various creatures that inhabit Hell and each one we meet is more strange and bizarre than the previous. Barker’s descriptions of Hell are remarkable and the creatures that inhabit that domain will visit and haunt your dreams. Everything culminates in Pinhead and Satan’s meeting, but it doesn’t go down the way you think it will!! If nothing else, Barker is still full of surprises.

I really enjoyed this novel and appreciated how far Barker has come in his writing. In his early works I sometimes felt Barker’s imagination was more than his writing could handle. But Barker really hit his stride in 1991s IMAJICA, and he has only gotten better since. The Hell in THE SCARLET GOSPELS is a chilling vision of what might have evolved in the absence of its ruler. But even more, is that Barker made it clear in promoting this novel that this will be the final installment in Pinhead’s journey’s. The climax is action-packed and awe-inspiring and had me reading it over and over again to make sure I didn’t miss anything.

THE SCARLET GOSPELS is a fitting end to the character of Pinhead and is a nice send off for Harry D’Amour as well. If you haven’t already, you need to check this novel out. You won’t be disappointed.

Tags: Devil Himself, The Scarlet Gospels

« who is clive barker?